skip to main | skip to sidebar

TeXShop and BibTeX for lazy guys - automatic call of bibtex

If you want to write a larger scientific document, like a diploma or doctoral thesis, you surely will use bibtex for creating your bibliography (and especially for the German guys: don't just copy and paste... but really use a good bibliography).

Just for completeness, a very nice and free client for working with a bibtex database is JabRef, which is available for MacOS, Linux and Windows.

If you work with TeXShop and use bibtex, compiling your document is quite hard work: first you need to set the texmode to "LaTeX", compile it, set it to "bibtex", compile it, set it back to "LaTeX" compile it. Indeed, a lot to point and click. The following tip will add an entry to your TeXShop called "lat-bib-lat", which does exactly this procedure for you:

Remark:
Apparently you need two runs of pdflatex in order to get the correct citations, so the script does two calls of pdflatex after calling bibtex.

Update:
The lat-bib-lat.engine can be found in the drop-down menu where you can choose the profile to be run as can be seen here: 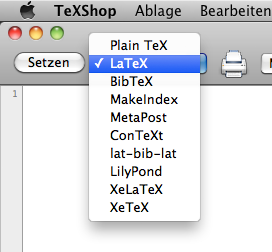 Thanks for the advice. I'm kind of disappointed, though, by your misleading blog title. I was hoping the people behind it would be some kickass nerd girls (who also happened to be Greek but living in Germany, or whatever)... turns out it's just another guy demeaning and objectifying women. 'cos that's what you're doing if you name an object after a woman and subsequently refer to said object as a bitch...

Thanks for this 'genious' comment. Just to let you know: the name was actually created by a woman who was the creator of the partner blog (which is now called eumenidae.blogspot.com for reasons you can read over there) and not by myself. We just took the German version of it to show the interconnection. And I would be very careful to blame other people of objectifying women (especially if you don't know them personally and know how their relation to women is...)

Just for the record: I do kick ass. Preferably daWuzzzz's. Ὁ μὴ δαρεὶς ἄνθρωπος οὐ παιδεύεται.
And while I do commend your ardour, petitioning for equal opportunities in Greek mythology looks like a lost cause to me.

Thanks for this helpful tip. However I can't find where the engine appears? Yes the lat-bib-lat.engine file is in the correct folder as an executable and I restarted TexShop. I also checked that the script works by putting this line in my source:
% !TEX TS-program = lat-bib-lat
But I still can't see where in TexShop (including preferences) this option appears. Any help appreciated.

here you are, I've updated the blog article with a screenshot. You should find the entry "lat-bib-lat" in the dropdown menu, where you can choose the executed profile (normally set to "LaTeX")

Hi, nice blog. I did all steps mentioned in the post. Even compiles but could not able see biblography in my document. Can u please help me with what possible thing may go wrong.

I had the same problem as you. As I was continually adding items to my bibliography, I found I had to compile bibtex first before using lat-bib-lat. This is easily remedied by a small addition to the engine file you create in terminal:

Thank you so much, I'm writing my thesis and compiling the bibliography was very annoying, now I can focus on writing without worrying about that troublesome situation.
Again, thanks.

Thank you for this useful piece of code. I am also writing my thesis with two weeks left. I have inserted all my citations and using a single bibtex library that I call in each chapter. However I keep getting question marks in place of numbers but the list of references in each chapter is still displayed at the end. Any ideas on how to fix this?

Thank you for this useful piece of code. I am also writing my thesis with two weeks left. I have inserted all my citations and using a single bibtex library that I call in each chapter. However I keep getting question marks in place of numbers but the list of references in each chapter is still displayed at the end. Any ideas on how to fix this?

Is there also a way to trash the aux files immediately after the last pdflatex command?

The `--synctex` option in the last compilation allows you to jump from pdf to corresponding line on .tex file (and vice-versa). In mac for example it will be (cmd + click).

Many thanks for this little trick, it has at this point probably saved me hours I would otherwise have spent switching back and forth between Latex and Bibtex.

This being said, I just encountered a problem when I tried installing the command on a new (late 2020) MacBook with Big Sur pre-installed. I can create the new engine without problems, it also appears in TexShop and the first part (LaTeX - BiBTex) runs fine. It does crash when it starts the last two runs of LaTeX and returns the following error (replace 'filename' with actual name of .tex file):

It seems to me that there's some confusion with the quotation marks, but I can't figure it out (neither an expert with the Terminal nor with Latex-hacks). If I run everything by hand, it works fine.

Any help would be greatly appreciated!!

Here you can read my adventures with Syssiphos, my MacBookAir 13'' and my iMac 27'' (late 2015) running MacOS 10.11. No affiliations with Ubuntu or Apple, just a public log file for stuff I found to be useful or took me quite a while to find out.